Radiance of Tomorrow: A Novel (Hardcover) 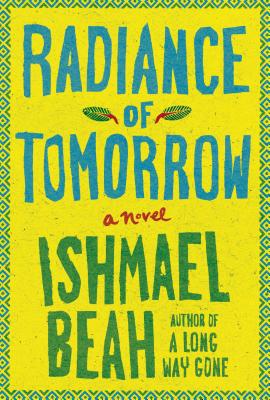 By Ishmael Beah
Email or call for price
Out of Print

You must read Ishmael Beah’s new novel, Radiance of Tomorrow. I don’t usually tell you what to read (okay, sometimes I do), but this novel affected me in a way no other novel of its type has since Scott Simon’s Pretty Birds.

Beah’s Radiance of Tomorrow is set mostly in the town of Imperi. A civil war has just ended and the townspeople are slowly returning to Imperi to try to regain their lands, their homes and their lives. The elders of the town are, of course, who most of the other residents turn to for advice, reassurance and solace. There is a group of young people headed by a quiet, daring young man, known as Colonel, who the residents turn to when something extra is needed.

Life is on its way back for Imperi when another former resident, Bockarie, returns to his hometown with his family to start anew. As Bockarie and his friend Benjamin are completely involved in teaching at the local school, a mining company comes to Imperi and takes over everything. The residents are harassed, their women are raped and their land is destroyed. Bockarie and Benjamin can not support their families on a teacher’s salary, especially when they are paid sporadically and the head master turns out to be a cheat. Bockarie and Benjamin succumb to the lure of more money working for the mining company. The residents of Imperi are forced out of their homes again.

Radiance of Tomorrow is packed with rich storytelling, memorable characters and writing that will leave you eagerly turning the pages. Granted, you will not be undisturbed by Beah’s story, but you will also not be unmoved. You will cry at the atrocities done to people and rejoice at the sense of community and survival brimming from these characters. -- Wendy, Redbery Books, Cable, Wisconsin

“Beah's lush and beautiful prose draws the reader into a story both devastating and uplifting. What happens after true evil destroys a country? In A Long Way Gone Beah wrote a moving memoir about the carnage in his native Sierra Leone. Now, his novel deals with what comes after the battles are over. How do people confront what they have endured and move on? Beah creates many memorable characters, each with tales that will break your heart while they also give you hope for the future.”
— Deon Stonehouse, Sunriver Books, Sunriver, OR

A haunting, beautiful first novel by the bestselling author of A Long Way Gone


When Ishmael Beah's A Long Way Gone was published in 2007, it soared to the top of bestseller lists, becoming an instant classic: a harrowing account of Sierra Leone's civil war and the fate of child soldiers that "everyone in the world should read" (The Washington Post). Now Beah, whom Dave Eggers has called "arguably the most read African writer in contemporary literature," has returned with his first novel, an affecting, tender parable about postwar life in Sierra Leone.
At the center of Radiance of Tomorrow are Benjamin and Bockarie, two longtime friends who return to their hometown, Imperi, after the civil war. The village is in ruins, the ground covered in bones. As more villagers begin to come back, Benjamin and Bockarie try to forge a new community by taking up their former posts as teachers, but they're beset by obstacles: a scarcity of food; a rash of murders, thievery, rape, and retaliation; and the depredations of a foreign mining company intent on sullying the town's water supply and blocking its paths with electric wires. As Benjamin and Bockarie search for a way to restore order, they're forced to reckon with the uncertainty of their past and future alike.
With the gentle lyricism of a dream and the moral clarity of a fable, Radiance of Tomorrow is a powerful novel about preserving what means the most to us, even in uncertain times.
Named one of the Christian Science Monitor's best fiction books of 2014

Ishmael Beah, born in 1980 in Sierra Leone, West Africa, is the New York Times bestselling author of A Long Way Gone: Memoirs of a Boy Soldier. The book has been published in over thirty languages and was nominated for a Quill Award in 2007. Time magazine named the book as one of the top ten nonfiction books of 2007, ranking it at number three. His work has appeared in The New York Times Magazine, Vespertine Press, LIT, Parabola, and numerous academic journals. He is a UNICEF Ambassador and Advocate for Children Affected by War; a member of the Human Rights Watch Children’s Rights Advisory Committee; an advisory board member at the Center for the Study of Youth and Political Violence at the University of Tennessee, Knoxville; visiting scholar at the Center for International Conflict Resolution at Columbia University; visiting Senior Research Fellow at the Center for the Study of Genocide, Conflict Resolution, and Human Rights at Rutgers University; cofounder of the Network of Young People Affected by War (NYPAW); and president of the Ishmael Beah Foundation. He has spoken before the United Nations, the Council on Foreign Relations, and many panels on the effects of war on children. He is a graduate of Oberlin College with a B.A. in Political Science and resides in Brooklyn, New York.

“Written with the moral urgency of a parable and the searing precision of a firsthand account . . . There is an allegorical richness to Beah's storytelling and a remarkable humanity to his characters. We see tragedy arriving not through the big wallops of war, but rather in corrosive increments.” —Sara Corbett, The New York Times Book Review

“In his 2007 memoir, A Long Way Gone, Ishmael Beah writes of those waiting for war to invade their lives: "Families who had walked hundreds of miles told how relatives had been killed and their houses burned. Some people felt sorry for them and offered them places to stay, but most of the refugees refused, because they said the war would eventually reach their town." The decade-long war in Sierra Leone between government forces and Liberian-funded rebels did eventually reach Beah's and other towns, and he was swept up in the conflict as a child soldier, a story he vividly recounts in his memoir. This time Beah has written an actual novel--his first--not about the war itself, but about its aftermath. What happens when those who have committed atrocities or have been the victims of them return to what is left of their homes? We get our answer via several residents of the devastated Sierra Leonean town of Imperi, where an older couple, Mama Kadie and Pa Moiwa, and a young schoolteacher named Bockarie are among the first to return. Recalling the Friday afternoon the town was attacked, they remember the rocket-propelled grenades that brought down the chief's compound, heralding a new order while "killing many people, whose flesh sizzled from the explosions." Those who escaped, and eventually made it through the war in good enough shape to return, considered themselves lucky, save for the survivor's guilt that forced them to seek comfort, even in the most horrifying places. Looking at the piles of human bones that still litter the town, Mama Kadie imagines that she might be able to identify the remains of her grandchildren among them. The pain of not knowing whether or not they had survived the war is too much to bear and she wants some finality. The town eventually falls into some kind of routine. Other survivors flood in from refugee camps in neighboring countries. Burned houses are rebuilt and a school is opened, allowing Bockarie to teach there. The notion that the town might return to its old, familiar ways soon vanishes, however, when a mining company, in search of rutile--used as a pigment in paint, plastic, and food--sets up shop, polluting the town's waterways. Bockarie's best friend also dies a senseless death while working at the mine. Bockarie eventually decides to return with his friend's wife to her hometown, only to find life even more unbearable there, in the shadow of a diamond mine. This leaves only Freetown, with its Chinese-run hotels, drug runners, and "false life" Europe- and U.S.-based returnees, who missed the war all together. This part of the novel leaves us wondering what might happen next to some characters to whom we've grown attached. However, as Beah reminds us on the book's final page, "It is the end, or maybe the beginning of another story.... Every story is a birth." In Radiance of Tomorrow, Beah has produced a formidable and memorable novel--a story of resilience and survival, and, ultimately, rebirth.” —Edwid

“UNICEF Ambassador Beah writes lyrically and passionately about ugly realities as well as about the beauty and dignity of traditional ways.” —Kirkus Reviews (starred review)

“A breathtaking and unselfpitying account of how a gentle spirit survives a childhood from which all innocence has suddenly been sucked out. It's a truly riveting memoir.” —Time on A Long Way Gone