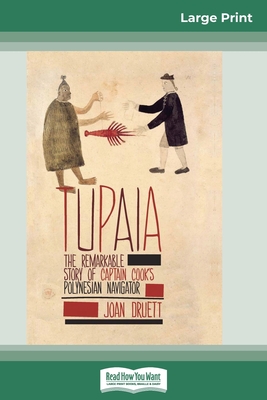 The remarkable story of Tupaia, Captain Cook's Polynesian navigator. Winner of NZ Post 2012 Best General Non - fiction Book Award. Tupaia, lauded by Europeans as 'an extraordinary genius', sailed with Captain Cook from Tahiti, piloted the Endeavour about the South Pacific, and interceded with Maori in NZ. Tupaia, a gifted linguist, a brilliant orator, and a most devious politician, could aptly be called the Machiavelli of Tahiti. Being highly skilled in astronomy, navigation, and meteorology, and an expert in the geography of the Pacific, he was able to name directional stars and predict landfalls and weather throughout the voyage from Tahiti to Java. Though he had no previous knowledge of writing or mapmaking, Tupaia drew a chart of the Pacific that encompassed every major group in Polynesia and extended more than 4,000 kilometres from the Marquesas to Rotuma and Fiji. He was also the ship's translator, able to communicate with all the Polynesian people they met. As a man of high social ranking, Tupaia performed as an able intermediary, interpreting local rituals and ceremonies. Joseph Banks is famous for his detailed, perceptive descriptions of the manners and customs of the Polynesian people. Much of the credit for this belongs to Tupaia. Not only did Tupaia become one of the ship's important artists, drawing lively pictures to illustrate what he described, but he could justly be called the Pacific's first anthropologist. Despite all this, Tupaia has never been part of the popular Captain Cook legend. This is largely because he died of complications from scurvy seven months before the ship arrived home. Once he was gone, his accomplishments were easily forgotten - indeed, by removing Tupaia from the story, what the Europeans had achieved seemed all the greater. This fascinating, handsome book also won the 2012 PANZ Book Design Award for best cover.