Power from Within: A Guide to Success as a Medical Malpractice Defense Expert (Paperback) 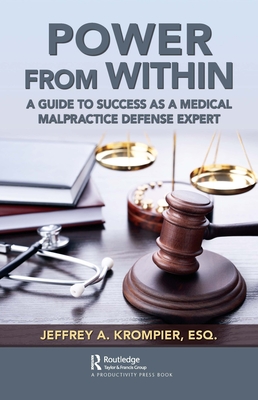 There is no end in sight to the frequency with which physicians, nursing professionals and other healthcare providers will become lawsuit targets in our litigious society. While politicians, practitioners, insurance companies and trial attorneys debate the nation's chronic malpractice crisis, suits continue to be filed. In addition, once COVID-19 is behind us and the unprecedented public support for health care providers wanes, as it will, it is anticipated that physicians and nurses will become malpractice defendants to a remarkable degree.

National legislative fact-finding committees and investigative bodies, which may be charged with the responsibility of pursuing a solution, likely will never achieve a global remedy. Although curtailed by some states, national legislation has not addressed baseless malpractice suites or grossly excessive monetary verdicts. Another approach exists, however.

Health care providers can impact the existing system and influence the malpractice environments in a tangible, positive and powerful fashion. Although there will be debate over tort reform in order to bring some degree of protection to the malpractice defendant, individual case success, defined from the defendant's perspective as a no-cause trial verdict, can be realized if well-credentialed and experienced health care professionals are willing to assist the malpractice defense bar as expert witnesses. The benefits to the health care community and the individuals who are willing to participate are innumerable and worth considering.

Jeffrey A. Krompier, Esq., is the founder and managing partner of the Parsippany, New Jersey, law firm which bears the name Krompier & Tamn, L.L.C. He is admitted to the bars of New Jersey and New York. Mr. Krompier is a 1977 magna cum laude and college honors graduate of Rutgers University and received both Phi Beta Kappa and Rutgers Scholar designations. In 1980, Mr. Krompier graduated from Seton Hall University School of Law, where he was an Associate Articles Editor of the Law Review and a judicial intern to the late Honorable Lawrence Whipple of the U.S. District Court for the District of New Jersey. Upon graduation, Mr. Krompier served as a judicial law clerk to the late Honorable Bertram Polow of the New Jersey Superior Court, Appellate Division, and thereafter began the private practice of law. In 1982, Mr. Krompier joined a medical malpractice defense firm where he practiced until 1986, when he founded his current firm, which is devoted to defending healthcare professionals in malpractice matters. In 1988, the New Jersey Supreme Court certified Mr. Krompier as a Civil Trial Attorney. Throughout his career, Mr. Krompier has been recertified five times (1995, 2002, 2007, 2012 and 2017) by the New Jersey Supreme Court as a Civil Trial Attorney. In 2012, he received certification in Civil Trial Advocacy by the ABA-accredited National Board of Trial Advocacy and certification in Civil Pretrial Practice Advocacy by the ABA-accredited National Board of Civil Pretrial Practice Advocacy. In 2017, Mr. Krompier was recertified in Civil Trial Law and Civil Pretrial Practice Law by the National Board of Trial Advocacy. He is a member of the American Bar Association, American Board of Trial Advocates with Advocate ranking and is a lifetime charter member of Rue Ratings' Best Attorneys of America. For the last 15 consecutive years (2007-2021), he was named a New Jersey Super Lawyer and has been listed in Super Lawyers magazine corporate counsel (2009-2011) and business (2011-2018) editions. In 2014, Mr. Krompier was named an Elite American Lawyer and honored for excellence in the law (2014-2015) by Worldwide Registry. In each of the years 2014 through 2019, he was named one of America's Most Honored Professionals by the American Registry, which also named Mr. Krompier one of America's Most Honored Lawyers in 2020. He also was identified as a Distinguished Attorney by Martindale-Hubbell each year from 2014 through 2021.In addition, Mr. Krompier is a named expert in the field of medical and dental malpractice defense litigation by Worldwide Who's Who and in 2015 became a lifetime member of Trademark Who's Who Honors Edition. In 2017, he was included in Worldwide Publishing's Top Lawyers - The Secrets to Their Success. In 2018, 2019, 2020 and 2021, Mr. Krompier was named one of America's Top 100 High Stakes Litigators for New Jersey and one of America's Top 100 Civil Defense Litigators for New Jersey. In 2021, he was named one of America's Top 100 Medical Malpractice Litigators for New Jersey. Mr. Krompier is a member of the New Jersey Bar (1980) and the New York Bar (1988) and has been admitted to the U.S. District Court for the District of NJ (1980) and the U.S. Court of Appeals for the Third Circuit (1986). In 2021, Mr. Krompier was admitted to the Bar of the Supreme Court of the United States.Mr. Krompier has defended in excess of 700 malpractice lawsuits involving most medical specialties and has served as defense counsel in more than 100 malpractice trials from jury selection through verdict. This is Mr. Krompier's second book. In 2012, he published Defense From Within - A Guide to Success As a Dental Malpractice Defense Expert for dental practitioners.