Circling the Sun: A Novel (Paperback) 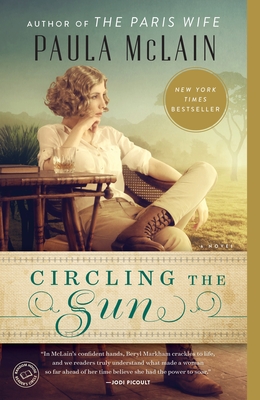 “Reading Circling the Sun reminded me of the deep pleasure of solid storytelling: the vast landscape of colonial Kenya, complicated and compelling historical characters, love, suffering, and adventure combine to create a captivating narrative. McLain imagines the African childhood and early adulthood of real-life horse trainer and pioneering female aviator, Beryl Markham, as well as her social milieu which included Denys Finch Hatton and Karen Blixen, who, as Isak Dinesen, wrote Out of Africa. Markham lived a fascinating and uncompromising life filled with danger, ill-fated romance, and stunning bravery, and McLain does justice to her memory with this sensitive and beautifully written portrayal.”
— Rhianna Walton (W), Powell's Books, Inc, Portland, OR

NEW YORK TIMES BESTSELLER • NAMED ONE OF THE BEST BOOKS OF THE YEAR BY NPR, BOOKPAGE, AND SHELF AWARENESS • “Paula McLain is considered the new star of historical fiction, and for good reason. Fans of The Paris Wife will be captivated by Circling the Sun, which . . . is both beautifully written and utterly engrossing.”—Ann Patchett, Country Living

This powerful novel transports readers to the breathtaking world of Out of Africa—1920s Kenya—and reveals the extraordinary adventures of Beryl Markham, a woman before her time. Brought to Kenya from England by pioneering parents dreaming of a new life on an African farm, Beryl is raised unconventionally, developing a fierce will and a love of all things wild. But after everything she knows and trusts dissolves, headstrong young Beryl is flung into a string of disastrous relationships, then becomes caught up in a passionate love triangle with the irresistible safari hunter Denys Finch Hatton and the writer Baroness Karen Blixen. Brave and audacious and contradictory, Beryl will risk everything to have Denys’s love, but it’s ultimately her own heart she must conquer to embrace her true calling and her destiny: to fly.

Praise for Circling the Sun

“In McLain’s confident hands, Beryl Markham crackles to life, and we readers truly understand what made a woman so far ahead of her time believe she had the power to soar.”—Jodi Picoult, author of Leaving Time

“Enchanting . . . a worthy heir to [Isak] Dinesen . . . Like Africa as it’s so gorgeously depicted here, this novel will never let you go.”—The Boston Globe

“Famed aviator Beryl Markham is a novelist’s dream. . . . [A] wonderful portrait of a complex woman who lived—defiantly—on her own terms.”—People (Book of the Week)

“Like its high-flying subject, Circling the Sun is audacious and glamorous and hard not to be drawn in by. Beryl Markham may have married more than once, but she was nobody’s wife.”—Entertainment Weekly

“[An] eloquent evocation of Beryl’s daring life.”—O: The Oprah Magazine

Paula McLain is the New York Times bestselling author of the novels Love and Ruin, Circling the Sun, The Paris Wife, and A Ticket to Ride, the memoir Like Family: Growing Up in Other People’s Houses, and two collections of poetry. Her writing has appeared in The New York Times, Good Housekeeping, O: The Oprah Magazine, Town & Country, The Guardian, The Huffington Post, and elsewhere. She lives in Ohio with her family.

“Paula McLain cements herself as the writer of historical fictional memoir with Circling the Sun, giving vivid voice to Beryl Markham, a singular, extraordinary woman. In McLain’s confident hands, Markham crackles to life, and we readers truly understand what made a woman so far ahead of her time believe she had the power to soar.”—Jodi Picoult, author of Leaving Time

“Richly textured . . . Markham’s life is the stuff of legend. . . . McLain has created a voice that is lush and intricate to evoke a character who is enviably brave and independent.”—NPR

“Paula McLain has such a gift for bringing characters to life. I loved discovering the singular Beryl Markham, with all her strengths and passions and complexities, a woman who persistently broke the rules, despite the personal cost. She’s a rebel in her own time, and a heroine for ours.”—Jojo Moyes, author of Me Before You

“By the last pages, readers will hate to say goodbye to such an irresistible narrator.”—Miami Herald

“Paula McLain brings Beryl to glorious life, portraying a woman with a great many flaws that seem to result from her zest for life and inability to follow the roles expected of women in the 1920s and ’30s.”—St. Louis Post-Dispatch

“Amelia Earhart gets all the airtime, but this pilot had the juicier past. . . . McLain crafts a story readers won’t soon forget.”—Good Housekeeping

“With a sharp eye for detail and style to spare, Paula McLain captures the nuances of complex relationships, the rigidity of social conventions, and the wide skies and breathtaking vistas of Africa.”—Christina Baker Kline, author of Orphan Train

“Set in 1920s Kenya, this fictionalized history of the beautiful, high-flying aviator Beryl Markham is as luminous as its headstrong heroine. An exhilarating ride.”—Family Circle

“Paula McLain is yet another twenty-first-century woman who can write rings around the hyper-masculine men who dominate so much of American fiction.”—Liz Smith

“McLain’s skill at blending fact and fiction, which dazzled readers in The Paris Wife, is on full display. . . . Circling the Sun is a masterful story of hardship, courage and love.”—Shelf Awareness