Viruses, Plagues, and History: Past, Present and Future (Paperback) 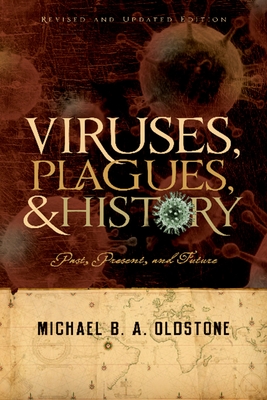 By Michael B. a. Oldstone
Email or call for price
Out of Print

The story of viruses and humanity is a story of fear and ignorance, of grief and heartbreak, and of great bravery and sacrifice. Michael Oldstone tells all these stories as he illuminates the history of the devastating diseases that have tormented humanity, focusing mostly on the most famous viruses.
Oldstone begins with smallpox, polio, and measles. Nearly 300 million people were killed by smallpox in this century alone and the author presents a vivid account of the long campaign to eradicate this lethal killer. Oldstone then describes the fascinating viruses that have captured headlines in more recent years: Ebola, Hantavirus, mad cow disease (a frightening illness made worse by government mishandling and secrecy), and, of course, AIDS. And he tells us of the many scientists watching and waiting even now for the next great plague, monitoring influenza strains to see whether the deadly variant from 1918--a viral strain that killed over 20 million people in 1918-1919--will make a comeback. For this revised edition, Oldstone includes discussions of new viruses like SARS, bird flu, virally caused cancers, chronic wasting disease, and West Nile, and fully updates the original text with new findings on particular viruses.
Viruses, Plagues, and History paints a sweeping portrait of humanity's long-standing conflict with our unseen viral enemies. Oldstone's book is a vivid history of a fascinating field, and a highly reliable dispatch from an eminent researcher on the front line of this ongoing campaign.

Michael B. A. Oldstone is Professor and Head of the Viral-Immunobiology Laboratory at The Scripps Research Institute. A leader in the field, he has been the recipient of numerous awards and honors and has served or serves on several national and international committees charged with understanding, treating and eliminating viral diseases. He was a consultant to the World Health Organization for the eradication of poliomyelitis and measles, and was a member of the SAGE Executive Board. He is a member of the National Academy of Sciences.