Godfather of the Kremlin: The Decline of Russia in the Age of Gangster Capitalism (Paperback) 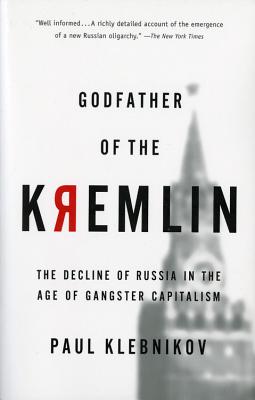 From nuclear superpower to impoverished nation, post-communist Russia has become one of the most corrupt regimes in the world. Paul Klebnikov pieces together the previous decade in Russian history, showing that a major piece of "the decline of Russia' puzzle lies in the meteoric business career of Boris Berezovsky.
Transforming himself from a research scientist to Russia's most successful dealmaker, Berezovsky managed to seize control of Russia's largest auto manufacturer, largest TV network, national airline, and one of the world's biggest oil companies. When Moscow's gangster families battled one another in the Great Mob War of 1993-1994, Berezovsky was in the thick of it. He was badly burned by a car bomb and his driver was decapitated. A year later, Berezovsky emerged as the prime suspect in the assassination of the director of the TV network he acquired. Although plagued by scandal, he enjoyed President Yeltsin's support, serving as the personal financial "advisor" to both Yeltsin and his family. In 1996, Berezovsky organized the financing of Yeltsin's re-election campaign-a campaign marred by fraud, embezzlement, and attempted murder. Berezovsky became the President's most trusted political advisor-playing a key role in forming governments and dismissing prime ministers.
Based on hundreds of taped interviews with top businessmen and government officials, secret police reports, contractual documents, and surveillance tapes, Godfather of the Kremlin is both a gripping story and a unique historical document.

Paul Klebnikov holds a Ph.D. in Russian History from the London School of Economics. He is a senior editor at Forbes and has reported on Russia since 1989. A fluent Russian speaker, he has won four press awards for his writing on Russian business.

Well informed . . . A richly detailed account of the emergence of a new Russian oligarchy."-The New York Times
Fascinating, well-written narratives of how a corrupt, oligarchic capitalist system has evolved since Yeltsin and his team first launched economic reforms in 1992."
-Business Week
[An] indispensable as well as riveting account of the rise of this cunning,
rapacious, and ruthless figure."-The Washington Monthly