The Running Revolution: How to Run Faster, Farther, and Injury-Free--for Life (Paperback) 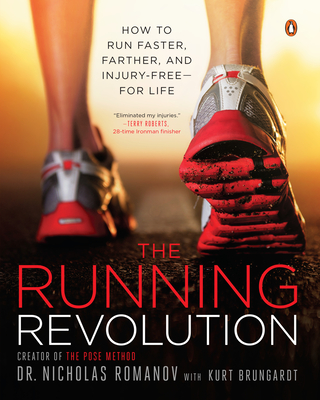 From a two-time Olympic coach and creator of the Pose Method who has trained the running elite, an essential guide for all runners seeking to go faster and farther without injury

Christopher McDougall’s Born to Run—and the wildly popular natural running trend it sparked—changed the way we think about running, but it has also prompted many questions: Have we been running the wrong way? And, have we been running in the wrong kind of shoe? What is the safest type of foot strike? How many types are there? And what is a foot strike anyway? No existing guide has clearly addressed these concerns—until now. The Running Revolution provides both beginning and experienced runners with everything they need to know in order to safely and efficiently transition to and master a safer and more biomechanically efficient way of running that is guaranteed to improve performance and minimize wear and tear on the body.

More than a one-size-fits-all guide, The Running Revolution provides readers with clear instructions, complete with helpful illustrations, that they can easily integrate into their unique running histories in order to run safely, intelligently, and efficiently for many years to come.

Nicholas Romanov is a two-time Olympic coach and world-renowned sports scientist known for creating the Pose Method. He consults with elite athletes and professional teams around the globe. Over the last several decades, the Pose Method has been utlized at an institutional level with large organizations including the United States Military, CrossFit, and professional sports programs including the National Triathlon teams of Great Britian, the United States, and Russia. He lives in Miami.

“The Pose Method of running has not only eliminated my injuries, it has been an integral part of continued improvement in my chosen sport. In fact at 52 years of age I am still improving. A bonus of the Pose Method for me has been significant health and strength improvement. My journey has been patient and progressive and had I continued to run as I did previously I believe I would now be limited to playing board games. My advice is to be patient and persevere; it truly is worth it.”
—Terry Roberts, 35 time Ironman finisher and Ironman Australia legend

"I have used these principles to develop running skill in US Army Soldiers since 2008 and have seen decreases of up to four minutes on a two-mile run within just two weeks.”
—Dr. Charles Blake, US Army Lieutenant Colonel and Director of US Army Physical Fitness School

“About one year ago, I could not run 50 yards without extreme IT Band Syndrome pain. I spent 30 minutes with Dr. Romanov and could run as far and as much as I wanted pain free. Today, I am the USA Paratriathlon National Champion.”
—David Kyle, Associate Director of Health and Physical Education, University of Alabama

“The material and insights detailed in The Running Revolution are scientifically, physically, and emotionally profound.  The Pose Method has the potential to be used as a standard by which running performances can be evaluated, coached, and enhanced.   If you are a runner looking for a resource to reduce injury risk, improve performance, and build your training program, look no further. In 25 years of working with running athletes, I have yet to find a more meaningful resource.”
—Tom Whipple, Physical Therapist, Penn State Sports Medicine and author of The Endurance Paradox

“Romanov’s teachings have dramatically changed and fundamentally shaped the way we think about, understand, and teach not only running, but all movement. I can say unequivocally, that no other information I have acquired in my career has influenced my teaching process more. The Pose Method is the only teaching method we use for our runners at LA PALESTRA.”
—Pat Manocchia, former “Good Morning America” fitness expert and founder of LA PALESTRA Center for Preventative Medicine

“To tens of thousands of runners, including me, Nicholas Romanov walks (and runs) on water.  Approaching running as a skill to be learned, his groundbreaking, much-copied Pose Method established a new paradigm, promoting a soft, natural landing that minimizes impact, maximizes speed, eliminates injuries, and saves running careers. No one thought about form until Romanov came along; now we know that it is crucial. I've interviewed dozens of runners who simply would not be running without it.”
—Roy M. Wallack, author of Barefoot Running Step by Step and Run for Life

“The Pose Method of running has been a crucial component of my Physical Therapy practice.  Not only does this method offer a clear standard for teaching and modifying running form, it also allows runners to run more efficiently. I instruct my patients in the Pose Method before allowing them to run again.  Since adopting this practice I have seen patients who were unable to run for years, not only start running again, but do so pain free. Other patients have shaved one to two minutes, on average, off of their two-mile Army Physical Fitness Test run times. Since learning the Pose Method, I have personally dropped my half marathon time by 10 minutes.”
—Lieutenant Colonel Angela Diebal, US Army Physical Therapist

"There's no doubt about it, the Pose Method made me a more efficient runner. And the beauty of the system is that no matter who you are, if you stick to the principles and apply them in each training session, you can't help but improve."
—Andrew Walters, Elite Australian Marathoner, Pose Method coach and founder of Setai-Do Australia

“I discovered Dr. Romanov's Pose Method about four years ago, and it has changed the way I understand running. Since then both my athletes and I have gained the ability to run great distances with less stress on the body, faster recovery and reduced running-related injuries. This book will help transform you into a smoother, more confident athlete.”
—Gil Cramer, Running Technique Specialist and elite Ultra Marathoner

“Movement skill is foundational for the performance community.  Dr. Romanov brings the same approach to running. Romanov's Running Revolution is the common standard upon which running skill can be built.”
—Colonel David Feltwell, US Army Physical Therapist

“Dr. Romanov has spent the majority of his life thinking about running problems and in close to one day the solutions came to him: Pose Method. I am overwhelmed by gratitude when I ponder how much time Dr. Romanov has invested into solving many of the running problems we have not understood in the past.”
—Debbie Savage, Strength and Conditioning Coach, Australian Sports Commission and former elite sprinter

“Romanov’s years of research and practice, coupled with Brungardt’s instructional writing, should be inspiring and informative for casual joggers and marathon runners alike.”