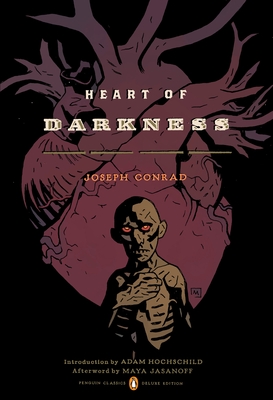 Joseph Conrad's enduring portrait of the ugliness of colonialism in a deluxe edition with a gripping cover by Hellboy artist Mike Mignola. Nominated as one of America’s best-loved novels by PBS’s The Great American Read

Heart of Darkness is the thrilling tale of Marlow, a seaman and wanderer recounting his physical and psychological journey in search of the infamous ivory trader Kurtz. Traveling upriver into the heart of the African continent, he gradually becomes obsessed by this enigmatic, wraith-like figure. Marlow's discovery of how Kurtz has gained his position of power over the local people involves him in a radical questioning, not only of his own nature and values, but of those that underpin Western civilization itself.

Joseph Conrad (originally Józef Teodor Konrad Nalecz Korzeniowski) was born in the Ukraine in 1857 and grew up under Tsarist autocracy. In 1896 he settled in Kent, where he produced within fifteen years such modern classics as Youth, Heart of Darkness, Lord Jim, Typhoon, Nostromo, The Secret Agent and Under Western Eyes. He continued to write until his death in 1924. Today Conrad is generally regarded as one of the greatest writers of fiction in English—his third language.

Adam Hochschild is the author of seven books, including King Leopold’s Ghost: A Story of Greed, Terror and Heroism in Colonial Africa and Bury the Chains: Prophets and Rebels in the Fight to Free an Empire’s Slaves. He teaches narrative writing at the Graduate School of Journalism, University of California at Berkeley.

Maya Jasanoff is the Coolidge Professor of History at Harvard. She is the author of the prize-winning Edge of Empire: Lives, Culture, and Conquest in the East, 1750–1850 (2005) and Liberty’s Exiles: American Loyalists in the Revolutionary World (2011), which received the National Book Critics Circle Award for Nonfi ction and the George Washington Book Prize, and The Dawn Watch: Joseph Conrad in a Global World (2017). A 2013 Guggenheim Fellow, Jasanoff won the 2017 Windham-Campbell Prize for Nonfiction.

Timothy S. Hayes is an Instructor of English at Auburn University in Alabama. His research interests include narrative theory and the novel, particularly the works of Robert Louis Stevenson and Joseph Conrad.

Mike Mignola is an award-winning artist and writer. He is the creator of Hellboy, which has been adapted into two feature films by Guillermo del Toro. He lives in Los Angeles, California.