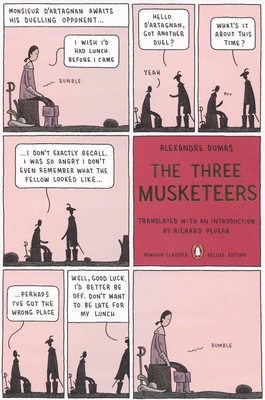 A major new translation of one of the most enduring works of literature, from the award- winning, bestselling co-translator of Anna Karenina-with a spectacular, specially illustrated cover

The Three Musketeers is the most famous of Alexandre Dumas's historical novels and one of the most popular adventure stories ever written. Now in a bracing new translation, this swashbuckling epic chronicles the adventures of d'Artagnan, a brash young man from the countryside who journeys to Paris in 1625 hoping to become a musketeer and guard to King Louis XIII. Before long he finds treachery and court intrigue-and also three boon companions: the daring swordsmen Athos, Porthos, and Aramis. Together they strive heroically to defend the honor of their queen against the powerful Cardinal Richelieu and the seductive spy Milady.

Alexandre Dumas was born July 24, 1802, at Villiers-Cotterets, France, the son of Napoleon's famous mulatto general, Dumas. Alexandre Dumas began writing at an early age and saw his first success in a play he wrote entitled Henri III et sa Cour (1829). A prolific author, Dumas was also an adventurer and took part in the Revolution of 1830. Dumas is most famous for his brilliant historical novels, which he wrote with collaborators, mainly Auguste Maquet, and which were serialized in the popular press of the day. His most popular works are The Three Musketeers(1844), The Count of Monte Cristo (1844-45), and The Man in Iron Mask (1848-50). Dumas made and lost several fortunes, and died penniless on on December 5, 1870.

Richard Pevear and Larissa Volokhonsky have produced acclaimed translations of Tolstoy, Dostoevsky, Gogol, and Bulgakov. Their translation of The Brothers Karamazov won the 1991 PEN/Book-of-the-Month Club Translation Prize. They are married and live in Paris, France.