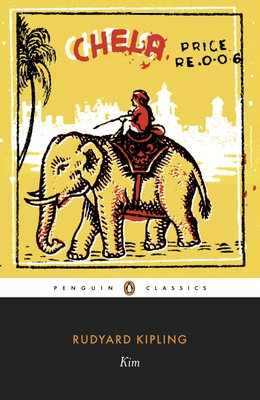 An epic rendition of the imperial experience in India, one of Kipling's greatest works

Kim, orphaned son of an Irish soldier and a poor white mother, and the lama, an old ascetic priest, are on a quest. Kim was born and raised in India and plays with the slum children as he lives on the streets, but he is white, a sahib, and wants to play the Great Game of Imperialism; while the priest must find redemption from the Wheel of Things. Kim celebrates their friendship and their journeys in a beautiful but hostile environment, capturing the opulence of the exotic landscape and the uneasy presence of the British Raj. Filled with rich description and vivid characters, this beguiling coming of age story is considered Kipling's masterpiece.

Rudyard Kipling (1865–1936) was born in Bombay. During his time at the United Services College, he began to write poetry, privately publishing Schoolboy Lyrics in 1881. The following year he started work as a journalist in India, and while there produced a body of work, stories, sketches, and poems —including “Mandalay,” “Gunga Din,” and “Danny Deever”—which made him an instant literary celebrity when he returned to England in 1889. While living in Vermont with his wife, an American, Kipling wrote The Jungle Books, Just So Stories, and Kim—which became widely regarded as his greatest long work, putting him high among the chronicles of British expansion. Kipling returned to England in 1902, but he continued to travel widely and write, though he never enjoyed the literary esteem of his early years. In 1907, he became the first British writer to be awarded the Nobel Prize.

Harish Trivedi (editor/introducer) is a professor of English at the University of Delhi. He is author of Colonial Transactions: English Literature and India (1993), and has co-edited The Nation across the World: Postcolonial Literary Representations (2007) and Literature and Nation: Britain and India 1800-1990 (2000).

By the Winner of the Nobel Prize in Literature

“A work of positive genius, as radiant all over with intellectual light as the sky of a frosty night with stars.” —The Atlantic Monthly