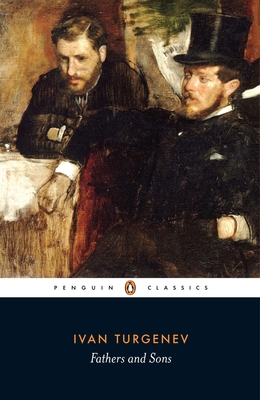 When Arkady Petrovich returns home from college, his father finds his eager, naïve son changed almost beyond recognition, for the impressionable Arkady has fallen under the powerful influence of the friend he has brought home with him. A self-proclaimed nihilist, the ardent young Bazarov shocks Arkady's father with his criticisms of the landowning way of life and his determination to overthrow the traditional values of contemporary society. Vividly capturing the hopes and fears, regrets and delusions of a changing Russia around the middle of the nineteenth century, Fathers and Sons is Ivan Turgenev's masterpiece.

Ivan Sergeyevich Turgenev was born in 1818 in the Province of Orel, and suffered during his childhood from a tyrannical mother. After the family had moved to Moscow in 1827 he entered Petersburg University where he studied philosophy. When he was nineteen he published his first poems and, convinced that Europe contained the source of real knowledge, went to the University of Berlin. After two years he returned to Russia and took his degree at the University of Moscow. In 1843 he fell in love with Pauline Garcia-Viardot, a young Spanish singer, who influenced the rest of his life; he followed her on her singing tours in Europe and spent long periods in the French house of herself and her husband, both of whom accepted him as a family friend. He sent his daughter by a sempstress to be brought up among the Viardot children. After 1856 he lived mostly abroad, and he became the first Russian writer to gain a wide reputation in Europe; he was a well-known figure in Parisian literary circles, where his friends included Flaubert and the Goncourt brothers, and an honorary degree was conferred on him at Oxford. His series of six novels reflect a period of Russian life from 1830s to the 1870s: they are Rudin (1855), A House of Gentlefolk (1858), On the Eve (1859; a Penguin Classic), Fathers and Sons (1861), Smoke (1867) and Virgin Soil (1876). He also wrote plays, which include the comedy A Month in the Country; short stories and Sketches from a Hunter’s Album (a Penguin Classic); and literary essays and memoirs. He died in Paris in 1883 after being ill for a year, and was buried in Russia.

Peter Carson learned Russian during National Service in the Navy at the Joint Services School for Linguistics, Crail and London, and at home - his mother's family left Russia after the Bolshevik Revolution. His working life has been spent on the editorial side of London publishing.

Rosamund Bartlett lectures on Russian and music at the University of Durham.

"No fiction writer can be read through with a steadier admiration."
--Edmund Wilson