The Fiancée: A Novel (Hardcover) 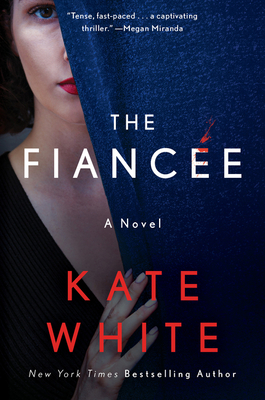 The New York Times bestselling author returns with an unsettling but riveting psychological thriller about a captivating woman who joins a family and threatens to upend their picture-perfect lives.

They had everything they needed for a perfect family vacation: close-knit relatives, a bucolic setting . . . and a murderer in their midst?

Summer’s looking forward to a break from hustling for acting work in Manhattan when she, her husband Gabe, and Gabe’s nine-year-old son arrive at the annual family get-together at her in-laws’ sprawling estate. On the agenda are leisurely gourmet meals, tennis matches, and plenty of relaxation by the pool.

But this year, Gabe’s brother Nick has invited his new flame Hannah, whom Summer immediately recognizes from a few years before. Oddly, her brother-in-law’s girlfriend claims not to know her. Yet she charms the other family members, and after Nick announces that he’s proposed to Hannah, Summer doesn’t have much choice but to grin and bear it.

Then the reunion is rocked by tragedy when a family member is found dead. Though the doctors attribute the loss to natural causes, a grieving Summer fears that the too-good-to-be-true Hannah is involved, even as Gabe dismisses her suspicions.

How far will Summer go to expose the truth? As she investigates just what Nick’s fiancée might have done to keep her perfect image intact, she begins to fear that the first death might only be the beginning . . .

Kate White is the New York Times bestselling author of eight standalone psychological thrillers, including Have You Seen Me? (2020) and the upcoming The Fiancée (June 2021), as well as eight Bailey Weggins mysteries, including Such a Perfect Wife, which was nominated for an International Thriller Writers Award. Kate, the former editor-in-chief of Cosmopolitan, is also the author of several popular career books for women, including I Shouldn't Be Telling You This: How to Ask for the Money, Snag the Promotion, and Create the Career You Deserve and Why Good Girls Don’t Get Ahead, as well the editor of the Anthony and Agatha Award-nominated The Mystery Writers of America Cookbook.

Praise for THE FIANCÉE: "A tense, simmering, fast-paced mystery, Kate White’s latest captivating thriller explores the secrets that lurk just under the surface of a picture-perfect façade. I raced through this story about a close-knit family’s annual gathering at an idyllic estate that quickly turns deadly. THE FIANCÉE kept me guessing until the very end, never sure who to trust—or where the danger was hiding."
— Megan Miranda

"Kate White’s THE FIANCÉE is exactly what we all need right now: a fast-paced, perfectly woven murder mystery, with a hearty dash of family drama. This one must not be missed!"
— Aimee Molloy

“Kate White’s newest thriller The Fiancée is a perfect poolside or beach read, as this psychological thriller has everything a great summer read needs! Told in an almost locked-room style, as we are secluded at a wealthy family’s sprawling estate, this mystery looks at what appears to be a picture-perfect family. . . . the constant threatening feeling in the air propels this psychological thriller to a truly surprising climax.”
— Nerd Daily