Have You Seen Me?: A Novel of Suspense (Large Print / Paperback) 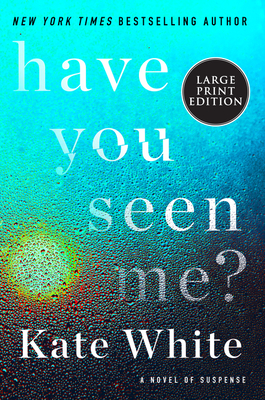 From New York Times bestselling author Kate White comes a gripping novel about one woman’s dangerous quest to recover lost memories someone would rather she never find.

The key to her missing memories could bring relief—or unlock her worst nightmares.

On a cold, rainy morning, finance journalist Ally Linden arrives soaked to the bone at her Manhattan office, only to find that she’s forgotten her keycard. When her boss shows, he’s shocked to see her—because, he explains, she hasn’t worked there in five years.

Ally knows her name, but is having trouble coming up with much beyond that, though after a trip to the psychiatric ER, she begins to piece together important facts: she lives on the Upper West Side; she’s now a freelance journalist; she’s married to a terrific man named Hugh. More memories materialize and yet she still can’t recall anything about the previous two days. Diagnosed as having experienced a dissociative state, she starts to wonder if it may have been triggered by something she saw. Could she have witnessed an accident—or worse—had something happened to her?

Desperate for answers, Ally tries to track where she spent the missing days, but every detail she unearths points to an explanation that’s increasingly ominous, and it’s clear someone wants to prevent her from learning where those forty-eight hours went. In order to uncover the truth, Ally must dig deep into the secrets of her past—and outsmart the person who seems determined to silence her.

Kate White is the New York Times bestselling author of eight standalone psychological thrillers, including Have You Seen Me? (2020) and the upcoming The Fiancée (June 2021), as well as eight Bailey Weggins mysteries, including Such a Perfect Wife, which was nominated for an International Thriller Writers Award. Kate, the former editor-in-chief of Cosmopolitan, is also the author of several popular career books for women, including I Shouldn't Be Telling You This: How to Ask for the Money, Snag the Promotion, and Create the Career You Deserve and Why Good Girls Don’t Get Ahead, as well the editor of the Anthony and Agatha Award-nominated The Mystery Writers of America Cookbook.

“Arms linked, breath held, we drop alongside Ally Linden into Kate White’s dagger-sharp, whip-smart new thriller Have You Seen Me?, the same questions burning like neon signs in our minds. . . . As nimbly plotted as Before I Go to Sleep, as winning as the best of Mary Higgins Clark, Have You Seen Me? showcases Kate White at her formidable best.”
— AJ Finn, #1 New York Times bestselling author of The Woman in the Window

“A well-honed thriller. . . . White skillfully maintains the pace. . . . Even the most jaded reader will be satisfied.”
— Publishers Weekly

“Provides the twists and shocks that any reader of domestic thrillers expects and savors, but she also manages to use some of our expectations to create clever dead ends...An engaging novel that turns some clichés of recent thrillers on their heads.”
— Kirkus Reviews

"This gripping psychological suspense tale is hard to put down."
— Booklist

"White is a master at creating sympathetic characters, and from the first pages of the novel through to its impressive twist ending, Ally is likeable, relatable, and compelling."
— The Big Thrill

"Kate White has done it again. Her latest novel, Have You Seen Me? stars Ally, who shows up at her old job with no memory of why she shouldn’t be there. White starts with a bang and keeps the suspense high throughout, weaving together a labyrinth of buried memories and disturbing revelations that blur the lines between what's true and what’s not. An addictive, up-all-night stunner."
— Kimberly Belle, internationally bestselling author of Dear Wife

“Well-executed...The smaller the town, the bigger (and dirtier) its secrets.”
— Kirkus Reviews