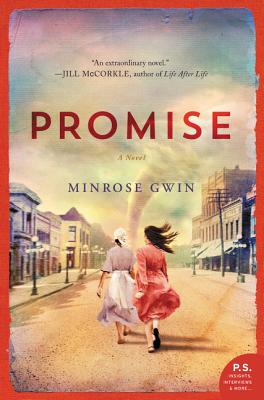 In the aftermath of a devastating tornado that rips through the town of Tupelo, Mississippi, at the height of the Great Depression, two women worlds apart—one black, one white; one a great-grandmother, the other a teenager—fight for their families’ survival in this lyrical and powerful novel

“Gwin’s gift shines in the complexity of her characters and their fraught relationships with each other, their capacity for courage and hope, coupled with their passion for justice.” -- Jonis Agee, bestselling author of The River Wife

A few minutes after 9 p.m. on Palm Sunday, April 5, 1936, a massive funnel cloud flashing a giant fireball and roaring like a runaway train careened into the thriving cotton-mill town of Tupelo, Mississippi, killing more than 200 people, not counting an unknown number of black citizens, one-third of Tupelo’s population, who were not included in the official casualty figures.

When the tornado hits, Dovey, a local laundress, is flung by the terrifying winds into a nearby lake. Bruised and nearly drowned, she makes her way across Tupelo to find her small family—her hardworking husband, Virgil, her clever sixteen-year-old granddaughter, Dreama, and Promise, Dreama’s beautiful light-skinned three-month-old son.

Slowly navigating the broken streets of Tupelo, Dovey stops at the house of the despised McNabb family. Inside, she discovers that the tornado has spared no one, including Jo, the McNabbs’ dutiful teenage daughter, who has suffered a terrible head wound. When Jo later discovers a baby in the wreckage, she is certain that she’s found her baby brother, Tommy, and vows to protect him.

Minrose Gwin is the author of three novels: The Queen of Palmyra, Barnes & Noble Discover Great New Writers pick and finalist for the John Gardner Fiction Book Award; Promise, finalist for the Willie Morris Award in Southern Literature; and The Accidentals.  In her memoir, Wishing for Snow, she writes about the convergence of poetry and psychosis in her mother’s life. Wearing another hat, she has written four books of literary and cultural criticism and history, most recently Remembering Medgar Evers: Writing the Long Civil Rights Movement, and coedited The Literature of the American South, a Norton anthology. Minrose began her career as a newspaper reporter. Since then, she has taught as a professor at universities across the country, most recently the University of North Carolina at Chapel Hill. She currently lives in Albuquerque, New Mexico. Like the characters in Promise, she grew up in Tupelo, Mississippi.

“The energy on the pages literally propels us with the force of that fierce and deadly wind, ripping apart the racial barriers, revealing the terrible secrets kept by whites and African-Americans alike. I couldn’t put this novel down, and I don’t think you’ll want to either.” — Jonis Agee, bestselling author of The River Wife

“Promise is a powerful story about yet another forgotten chapter in our great national drama. Minrose Gwin knows her characters well and writes about them and their place and times with sympathy and wisdom.” — Steve Yarbrough, author of The Realm of Last Chances

“[An] impressive novel. Promise takes on the page-turning pacing of a mystery while remaining solidly literary.” — BookPage

“In elegant prose, Gwin illustrates the vast schism in our culture; more importantly, she shows us our shared humanity.” — Historical Novels Review

“[An] atmospheric whirlwind of a book. A memorable, dreamlike narrative […] that vividly conveys what it was like to survive the fourth most deadly tornado in U.S. history; it also brings to light the vast disparity in the care and treatment of white vs. black residents.” — Library Journal

“A gripping tale of racism, power, and the bonds that make a family.” — Booklist

“Promise is innately worth reading because it involves a gripping true story that emphasizes a terribly dark time in America’s history, but the inspired, thoughtful and beautiful writing takes it to another level.” — Atlanta Journal-Constitution

“This book is a monumental achievement, and Gwin is a fiercely talented writer.”

“This story of bravery and survival is heart wrenching and uplifting, well researched and realistic. Filled with beautiful language and a quick pace, Promise will not be easily forgotten by readers.”   — RT Book Reviews

“Promise is an extraordinary novel [...] one of racial divides, good and evil, destruction and salvation and those clear moments of grace and humanity that bring hope into the most desperate times. I could not put it down.” — Jill McCorkle, author of Going Away Shoes