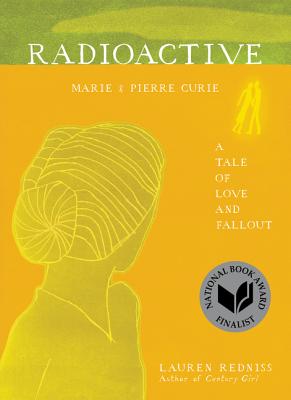 “Radioactive is quite unlike any book I have ever read—part history, part love story, part art work and all parts sheer imaginative genius.”
— Malcolm Gladwell

Radioactive is the mesmerizing, landmark illustrated biography of Marie Curie, by acclaimed author and artist Lauren Redniss. Through brilliant visual storytelling, Redniss walks us through Curie’s life, which was marked by extraordinary scientific discovery and dramatic personal trauma-- from her complex working and romantic relationship with Pierre Curie, to their discovery of two new scientific elements, to Pierre’s tragic death, to Marie’s two Nobel Prizes. A haunting and wondrous portrait of one of history's most intriguing figures, Radioactive combines archival photos, images, and clippings with dazzling line drawings and a compelling narrative to tell Curie’s story. Far more than an art book or a graphic novel, Radioactive is a stunning visual biography and a true work of art.

Lauren Redniss is the author of Century Girl: 100 years in the Life of Doris Eaton Travis, Last Living Star of the Ziegfeld Follies and Radioactive: Marie & Pierre Curie, A Tale of Love and Fallout, a finalist for the 2011 National Book Award for non fiction. Her writing and drawing has appeared in numerous publications including the New York Times, which nominated her work for the Pulitzer Prize. She was a fellow at the Cullman Center for Scholars & Writers at the New York Public Library in 2008-2009 and became a New York Institute for the Humanities fellow in 2010. Beginning in 2012, she will be artist-in-residence at the American Museum of Natural History. She teaches at Parsons the New School for Design in New York City.

“One of the most beautiful books-as-object that I’ve ever seen.” — Elizabeth Gilbert, author of Eat, Pray, Love

“[Radioactive is] a deeply unusual and forceful thing to have in your hands. Ms. Redniss’s text is long, literate and supple…Her drawings are both vivid and ethereal…Radioactive is serious science and brisk storytelling. The word ‘luminous’ is a critic’s cliché, to be avoided at all costs, but it fits.” — New York Times

“Radioactive is quite unlike any book I have ever read—part history, part love story, part art work and all parts sheer imaginative genius.” — Malcolm Gladwell

“Absolutely dazzling. Lauren Redniss has created a book that is both vibrant history and a work of art. Like radium itself, Radioactive glows with energy.” — Richard Rhodes, author of The Making of the Atomic Bomb, winner of the Pulitzer Prize

“Radioactive offer innumerable wonders. Colors suddenly bloom into tremendous feeling, history contracts into a pair of elongated figures locked in an embrace, then expands again in an explosive rush of words. In this wholly original book about passion and discovery Lauren Redniss has invented her own unique form.” — Nicole Krauss, author of The History of Love