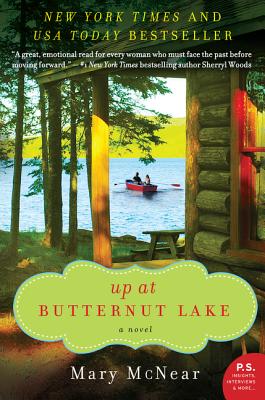 This is book number 1 in the A Butternut Lake Novel series.

In the tradition of Kristin Hannah and Susan Wiggs, Mary McNear introduces readers to the town of Butternut Lake and to the unforgettable people who call it home.

It's summer, and after ten years away, Allie Beckett has returned to her family's cabin beside tranquil Butternut Lake, where as a teenager she spent so many carefree days. She's promised her five-year-old son, Wyatt, they will be happy there. She's promised herself this is the place to begin again after her husband's death in Afghanistan. The cabin holds so many wonderful memories, but from the moment she crosses its threshold Allie is seized with doubts. Has she done the right thing uprooting her little boy from the only home he's ever known?

Allie and her son are embraced by the townsfolk, and her reunions with old acquaintances—her friend Jax, now a young mother of three with one more on the way, and Caroline, the owner of the local coffee shop—are joyous ones. And then there are newcomers like Walker Ford, who mostly keeps to himself—until he takes a shine to Wyatt . . . and to Allie.

Everyone knows that moving forward is never easy, and as the long, lazy days of summer take hold, Allie must learn to unlock the hidden longings of her heart, and to accept that in order to face the future she must also confront—and understand—what has come before.

Mary McNear, New York Times and USA Today bestselling author of the Butternut Lake series, writes in a local doughnut shop, where she sips Diet Pepsi, observes the hubbub of neighborhood life, and tries to resist the constant temptation of freshly made doughnuts. Mary bases her novels on a lifetime of summers spent in a small town on a lake in the northern Midwest.

“A great, emotional read for every woman who must face the past before moving forward” — #1 New York Times bestselling author Sherryl Woods

“this [...] charming debut should attract fans of Susan Wiggs and Luanne Rice.” — Booklist

“McNear has created a sweet romance wrapped in several interesting storylines. It’s easy to root for the happiness of all the leads, and it seems likely that all will find peace and contentment.” — New York Journal of Books

“Up at Butternut Lake is charming and uplifting [...] Readers will likely cherish and appreciate this romantic and refreshing debut.” — RT Book Reviews (4 Stars)