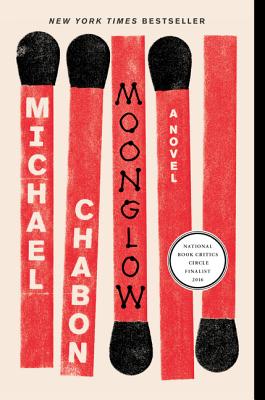 Fact or fiction, who cares? All I know is that I really would’ve liked to have met Chabon’s grandparents and mother who live large in his latest book, Moonglow. Painful memories of war, grandfather’s obsession with rockets and space travel, grandmother’s mental fragility and beauty, and his tentative but resolute unraveling of the past with his mother. Moonglow takes each of these lives and makes them rich, funny and, well, plausible. Suspend all disbelief and jump on. You’re in for quite a ride.  -- Susan, Redbery Books, Cable, Wisconsin

“The intersection of world history and family history, the interplay of memory and imagination, a tangle of humor and grief, and the blurred and shifting line that separates sanity and madness all come into play in this stunning book. In the months before his death, Chabon's grandfather revealed much of his life to his grandson. On that foundation, Chabon has built a novel filled with family stories, World War II episodes -- including an appearance by Wernher von Braun -- an obsession with rocketry, and a vividly realized, against-all-odds love story. While all the characters are richly developed, the narrator's grandfather -- the brave, eccentric, anger-fueled, and deeply loving center of this novel -- will remain with readers forever.”
— Banna Rubinow (E), The River's End Bookstore, Oswego, NY

“A feeling of wonder pervades this captivating novelization of the mysterious lives of Chabon's grandfather and grandmother. This thrilling, poignant, and magical book left me feeling like I do when I leave the theater after a great movie-I couldn't talk; I just had to readjust to the world.”
— Tim Benz, Joseph-Beth Booksellers, Crestview Hills, KY

Following on the heels of his New York Times bestselling novel Telegraph Avenue, Pulitzer Prize-winning author Michael Chabon delivers another literary masterpiece: a novel of truth and lies, family legends, and existential adventure—and the forces that work to destroy us.

In 1989, fresh from the publication of his first novel, The Mysteries of Pittsburgh, Michael Chabon traveled to his mother’s home in Oakland, California, to visit his terminally ill grandfather. Tongue loosened by powerful painkillers, memory stirred by the imminence of death, Chabon’s grandfather shared recollections and told stories the younger man had never heard before, uncovering bits and pieces of a history long buried and forgotten. That dreamlike week of revelations forms the basis for the novel Moonglow, the latest feat of legerdemain from Pulitzer Prize-winning author Michael Chabon.

Moonglow unfolds as the deathbed confession of a man the narrator refers to only as “my grandfather.” It is a tale of madness, of war and adventure, of sex and marriage and desire, of existential doubt and model rocketry, of the shining aspirations and demonic underpinnings of American technological accomplishment at midcentury, and, above all, of the destructive impact—and the creative power—of keeping secrets and telling lies. It is a portrait of the difficult but passionate love between the narrator’s grandfather and his grandmother, an enigmatic woman broken by her experience growing up in war-torn France. It is also a tour de force of speculative autobiography in which Chabon devises and reveals a secret history of his own imagination.

From the Jewish slums of prewar South Philadelphia to the invasion of Germany, from a Florida retirement village to the penal utopia of New York’s Wallkill prison, from the heyday of the space program to the twilight of the “American Century,” the novel revisits an entire era through a single life and collapses a lifetime into a single week. A lie that tells the truth, a work of fictional nonfiction, an autobiography wrapped in a novel disguised as a memoir, Moonglow is Chabon at his most moving and inventive.

Michael Chabon is the bestselling and Pulitzer Prize-winning author of Moonglow and The Amazing Adventures of Kavalier & Clay, among many others. He lives in Berkeley, California with his wife, the novelist Ayelet Waldman, and their children.

“Elegiac and deeply poignant ... Chabon weaves these knotted-together tales together into a tapestry that’s as complicated, beautiful and flawed as an antique carpet.... Chabon is one of contemporary literature’s most gifted prose stylists.... In Moonglow, he writes with both lovely lyricism and highly caffeinated fervor.”
— Michiko Kakutani, New York Times

“An exuberant meld of fiction and family history.... It’s the caliber of his writing-evocative sentences and indelible metaphors-that gives the novel its luster…. Moonglow prisms through a single life the desires and despair of the Greatest Generation, whose small steps and giant leaps continue to shape us all.”
— Hamilton Cain, O Magazine

“A wondrous book that celebrates the power of family bonds and the slipperiness of memory….A thoroughly enchanting story about the circuitous path that a life follows, about the accidents that redirect it, and about the secrets that can be felt but never seen, like the dark matter at the center of every family’s cosmos.”
— Ron Charles, The Washington Post

“Mix[es] in generous dollops of meaning, a sprinkling of fancy metaphors and an abundance of beautiful sentences so that it becomes a rich and exotic confection. Too strict a recipe would have spoiled the charm of this layer cake of nested memories and family legends.… This book is beautiful.”
— A.O. Scott, New York Times Book Review, cover review

“A flamboyantly imaganitive work of fiction dressed in the sheep’s clothing of autobiography....His most confident and complex performance....Moonglow is a movingly bittersweet novel that balances wonder with lamentation.”
— Sam Sacks, The Wall Street Journal

“Like The Mysteries of Pittsburgh, Wonder Boys, and especially The Amazing Adventures of Kavalier & Clay, this is classic Chabon: an intensely personal story uplifted by the shifting tectonic plates of truth and memory, floating atop his inimitably crafted, sometimes audacious, always original prose.”
— Jon Foro, The Amazon Book Review, Spotlight Pick

“An often rollicking, ultimately moving read. And like the song, it’s liable to stay with you.”
— Heller McAlpin, NPR.org

“Absolutely brilliant…. Stylistically and emotionally, Moonglow took our breath away over and over.”
— iBooks Review

“His prose is as luminous as ever.”
— Entertainment Weekly

“A story as much about the art of storytelling as it is about family, history, and the 20th century, Moonglow is a dazzling achievement.”
— Buzzfeed

“Michael Chabon fills this dashing, Technicolor tribute to his grandfather’s generation with outsize mythology. Space travel and sorcery are just two of the novel’s wondrous themes. The book, his best yet, cements his place in the front of American writers.”
— Best Book of the Year, The Wall Street Journal

“The grandfather is a terrific character: difficult, complex, admirable—at once unique and typical of a generation…. Audacious and accomplished, Moonglow is a four-hundred-page love letter to that generation, and one is thankful to Chabon for having brought one of those characters so vividly back to life.”
— Francine Prose, New York Review of Books

“An exercise in exploring the slippery nature of truth, memory and what makes a compelling story. Are stories ‘just names and dates and places [that don’t] add up to anything?’ like Grandpa suggests? Or are they, instead, something more illusive, more aching, more mysterious and meaningful. In terms of Moonglow, it’s definitely the latter.”
— Alexis Burling, San Francisco Chronicle

“Moonglow is most fundamentally a credible and carnal love story. You so love the two grandparents that you have a stake in their literal existence. You want the world to be like this, not just some book. Art, such magical stuff is called.”
— Robert Christgau, The Village Voice

“A magical family narrative that is as grand and mysterious as the literary form in which he presents it.”
— Kevin Nance, Poets & Writers

“Moonglow explores the war, sex, and technology of mid-century America in all its glory and folly. It’s simultaneously Chabon’s most imaginative and personal work to date.”
— November Preview: The Millions Most Anticipated

“A dying grandfather transports the reader through an entire era via lyrical tales of war, love and model rockets.”
— Time

“You will not find better, funnier, more varied writing in a novel this year.”
— Katy Waldman, Slate

“Chabon aims for the moon and successfully touches down on the lunar surface.... An emotional tale of love and loss; fabulous, at times magical, writing. Moonglow floats through time and space to carry the reader to a fascinating new world.”
— Jonathan Elderfield, Associated Press

“Refreshing honest, funny, and succint: Chabon in a nutshell.... Moonglow is a long, elegant mess that feels like truth. It is both elegiac and immeditate, balanced between rambling, wrenching emotion and clean descriptive precision.”
— Emily Simon, Buffalo News

“This novel is Chabon’s Apollo mission to the past, launched with the same combination of ingenuity, dedication, and wonder.”
— Adam Kirsch, Tablet

“There’s rarely a moment in this book ... when Chabon isn’t delivering some of the liveliest and richest writing to be found on the current fiction scene.”
— Chris Barsanti, PopMatters

“His most beautifully realized novel to date ... a masterful and resounding novel of the dark and blazing forces that forged our tumultuous, confounding, and precious world.”
— Booklist, starred review

“Luminous.... The story builds to core revelations of wartime horror and postwar heartbreak as powerful as they come.”
— Library Journal, starred review

“Utterly enchanting. Chabon makes you believe, even as you know you’re being pulled along by the romance of a good story. Moonglow is a novel about faith in storytelling itself.”
— Christine Pivovar, The Rumpus

“All stories worth telling are at their hearts mysteries, a search for missing pieces. This is true of both fact and fiction, a point the book deftly makes by the sly counterpoint of those categories. In Moonglow, Chabon has taken on that search with a quiet, cosmic playfulness.”
— Talya Zax, Forward

“Charming and elegantly structured.... What seduces the reader is Chabon’s language, which reinvents the world, joyously, on almost every page.”
— Publishers Weekly

“Moonglow is another literary tour de force by one of America’s great writers, extraordinary rich and poignant.”
— Jonathyan Kirsch, The Jewish Journal

“Moonglow blurs the line between autobiography and fiction in interesting ways, and manages to feel more artful than most memoirs and more true than most novels.”
— Bookish

“If we consider the novel a race and the memoir a marathon, Chabon has been training for Moonglow his whole career.”
— Julia Cook, The Stranger

“Inventively fuses family history and fiction but leaves cracks for happiness and meaning to shine through.”
— Rebecca Foster, Pittsburgh Post-Gazette