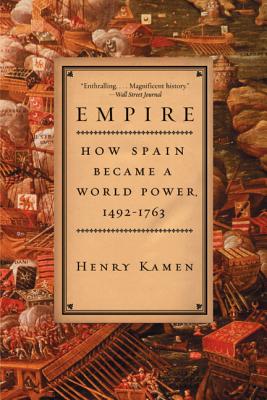 From the late-fifteenth to the mid-eighteenth century, Spain was the most extensive empire the world had seen, stretching from Naples and the Netherlands to the Philippines. This provocative work of history attributes Spain's rise to power to the collaboration of international business interests, including Italian financiers, German technicians, and Dutch traders. At the height of its power, the Spanish Empire was a global enterprise in which non-Spaniards -- Portuguese, Basque, Aztec, Genoese, Chinese, Flemish, West African, Incan, and Neapolitan -- played an essential role.

Henry Kamen is a fellow of the Royal Historical Society in London and an emeritus professor of the Higher Council for Scientific Research in Barcelona. He is the author of Empire: How Spain Became a Great Power, 1492-1763, as well as several other books on Spain. He divides his time between Barcelona and the United States.

“An import chronicle, written with fluidity and a commanding sweep, along with a sharp eye for telling detail.”
— Atlantic Monthly

“As new forms of global imperialism develop, this sophisticated and broad-minded book could not be more timely.”
— Publishers Weekly